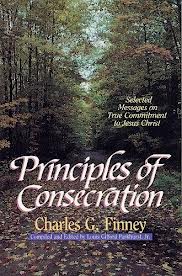 The sermons in this collection originally appeared in a periodical called The Oberlin Evangelist. In spite of Finney’s overt Arminianism, which he holds in a caustic spirit at times, I found the content of these addresses to be occasionally beneficial. I was convicted of sometimes doing my Christian duty in an unhappy spirit, and of being anxious to be done with it (p. 61); of sometimes avoiding worldliness just out of fear of hell (p. 66); and of too weakly fulfilling certain conditions of discipleship, like consecration, and mortification of pet sins (pp. 74, 75.) And I was encouraged to persevere through my trials by the following admonition: “These are the bright spots in your history, in which you have an opportunity to make the deepest impression upon the world” (p. 119.)

Some sharp definitions are laid down on vital matters in practical theology. On self-denial: “It is no proper denial of self unless we might benefit by the thing which is given up”  (p. 34.) In other words, it will not benefit you spiritually to give up things that are not hindering your spiritual progress. Giving up movies, sports, or television, then, will help you a lot. On cross-bearing: “The true spirit of cross-bearing for the sake of Christ is a state of mind that feels Christ to be such an all-sufficient portion as to perfectly satisfy the soul in the absence of everything else” (p. 36.)

There are some thought-provoking opinions, of which the following may be the best one: “Their selfishness led the Jews to misunderstand and misinterpret the ceremonial law—to look upon it as a religion of works. Instead of understanding it to be a system of typical instruction, by and through which the most spiritual truths were taught….” (p. 230.) That the Jews were expected to meditate on the spiritual significance of their ceremonies is not something that ever struck me very much until I read this.

There are some educated judgments, not just touching upon psychology and physiology separately, but even concerning how the mind and body relate during spiritual exercise. The here is on page 121. The subject is the need of fasting for the purpose of drawing the mercy of God: “When the mind is strongly exercised, there is a powerful determination of blood to the head…food cannot be taken without serious detriment to the required state of mind. If the blood is diverted from the head to the stomach, the strong exercise of the mind must necessarily, in a great measure, cease.” Now that’s just plain doctoral, both medically and spiritually.

There are criticisms leveled at sins committed in the pulpit in Finney’s time that are even more fitting reproofs for ministers of our day. Concerning appeals to sinners to repent, Finney observes, “It often happens that nearly all the reasons urged by ministers and others to induce people to become Christians are mere appeals to their selfishness” (p. 176.) Is that not what’s happening in the evangelical world of our own day? The root cause of that kind of thing is the fear of man: “Many ministers are afraid of men…Rather than offend someone, they immediately qualify, explain away and apologize for what they said until they have neutralized the truth” (p. 219.) Truth is neutralized by apologies and qualifications; and then sinners are urged to become Christians for selfish gain! Unless you are singularly blessed, that’s what’s going on from behind your pulpit. We need straightforward finger-pointing just like this. Finney even weighs in against bad pulpit manners: “affected pronunciation…gestures…flattery…angling for compliments” (p. 217.) How many ministers are brave enough to confront such pretensions in their peers? Almost no minister will do this because ministers, generally, love themselves more than they revere God. I am not an admirer of Finney’s theology; but ethically, at least, he is to be ranked far above your average 20th/21st century minister. Let’s praise him at least for that.

I appreciate that he leaves no room for Christians having an easy go. “Do not infer from your temporal prosperity that God approves of your course of life or that you are the favorite of heaven,” he says (p. 32.) Unless your happiness supersedes that happiness you had gotten by gratification, he continues, you have cause to doubt your conversion (p. 42.) That may be a good point to ponder. It’s tough counsel, and we need it. But then he just takes things way too far, and even insists on sanctification as a condition of salvation. Denying yourself daily, he says, is “an indispensable condition of salvation” (p. 44.) He is obviously not speaking here, of that initial sanctification by the Spirit that we call regeneration, but of the practice of holiness. This is nothing else than to be saved by works, then. That his theology is Pelagian is beyond question: “You must renounce your selfishness…You must change your heart” (p. 81, emphasis added.) That sounds like regeneration by self, or just self-reformation. Charles Finney’s unorthodoxy is consistent, though, at least in the following two particulars. He believes that salvation may be lost (p. 94.) That falsehood follows naturally from the belief that salvation is by works. Also, he teaches some brand of ‘Christian Perfection’: the false belief that man may bring himself to perfection in this life (pp. 49, 78, 79, 102.) So on the one hand you can merit your salvation and lose it; on the other, you can save yourself and perfect yourself too. It’s all up to you, one way or the other—this is his teaching.

Though his definition of total depravity is totally incorrect, this comment will show what Charles Finney is capable of as a stylist: “This is moral depravity—enmity against God—entire consecration to self-gratification” (p. 166.) Not bad.

His opinions on Christian practice vis-à-vis politics are worth reading. But nothing is said there in The Necessity of Human Governments that has not been more convincingly argued. For the record, Charles Finney spoke out against the wrongs done by to the Indians and the church’s silence about it, and he opposed slavery. Any formed upon a principle that would support slavery, or that would oppose the abolition of it, was boldly and plainly labeled ‘a league of iniquity’ by him (p. 137.) He also denounced ‘duel-fighting…in Congress,’ which happened nearly every year in his day (p. 138.) This cultural context makes the volume peculiarly interesting. Because Charles Finney’s theology is shady, though, I can just cautiously recommend this book.

Content: B (Moral, theologically weak, sometimes heretical.)
Style: B (Occasionally dashing.)
Tone: B (Challenging, but not civil enough.)
Grading Table: A: a keeper: reread it; promote it; share it.
B: an average book: let it go.
C: read only if you have to.
Posted by The Analyst at 5:02 PM