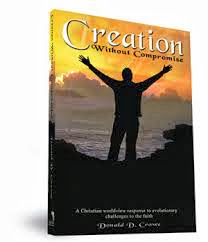 Evils like eugenics, abortion, infanticide, and genocide are more acceptable from the standpoint of believing that man is an evolved ape than from the view of man being made in the image of God (p. 17.) If ‘survival of the fittest’ is the method by which man came into his own, then why not continue to exploit the weak? (p. 239.) A Darwinian struggle for existence involves no matter of right or wrong (p. 266.) “The survival of the fittest necessarily involves the death of the less fit” (p. 265.) Therefore it remains relevant and necessary to weigh the theory of evolution against the biblical account of creation, to decide for one of the other, and to promote the truth.

The theory of evolution still lacks the fossil evidence that is needed to back it up (p. 88.) Not only this, but it has no answer as to how the universe came from a speck, how randomness came to order, how inanimate matter came to life, or how life proceeded to intelligence (p. 276.) admitted that complexity coming about by natural selection to be an absurd proposition (p. 103.) In his most influential book may be found many suppositions just on one page (p. 100.) If a hypothesis (like the theory of evolution) seems uncertain, it is wise to maintain our position (for creation, p. 142.)

The present immoral situation that we are in came about through a gradual dismissal of biblical content. Supernaturalism was first set aside, then the moral system (p. 256.) Donald C. Crowe would convince us to take the Bible seriously, not only on matters touching the supernatural and moral, but the cosmological and scientific as well. That the Bible was ‘not written to tell us how the heavens go, but how to go to heaven’ is an apology that he considers a compromise (p. 202.) Moreover, he believes that the genealogies of Genesis 5 and 11 are to be taken as if they yield to us a detailed record of transpired years from the days of Adam to Abraham. This is why, I suppose, that he is able to pigeonhole the scattering that occurred at the at ‘about 2242 B. C.’ (p 22.) In short, he defends the chronological scheme of Archbishop Ussher (p. 62.)

It is true that the genealogies of Genesis 5 and 11 present a more ‘interlocking format’ than does Matthew 1, which makes it more problematic to justify hidden years between persons (pp. 67, 68, 179.) But William Green (1890), strongly criticized by Mr. Crowe, would have us consider (in Evolution and Antiquity by J. D. Thomas, p. 59) that the impression we get from reading the narrative concerning Abraham is that the persons carried through the Flood had passed away long before Abraham was born. Was the death of Noah and the birth of Abraham really separated by just two years, as Mr. Crowe insists? (p. 63.) It doesn’t feel like it when you read the life of Abraham in Genesis. That the Bible does not ‘state a date of creation’ is a statement that Mr. Crowe will not bear (p. 288.) The man is so wild with zeal to convince us of a certain, precise, inspired chronology that he unleashes insupportable allegations against Green, Charles Hodge, B. B. Warfield, and even C. H. Spurgeon.  Maybe Spurgeon asserted, in one sermon or other, the existence of ‘pre-Adamite humanoids,’ as Crowe alleges on page 244. But do ‘races of creatures’ (p. 243) have to mean ‘humanoids’? Spurgeon speaks there of ‘races of creatures’ created by God ‘before he tried his hand on man.’ We might disagree with that. But the quote on page 243 does not support what Crowe alleges on page 244. Because Green points out the names that are omitted from the genealogy of Matthew 1, does that amount to the passage being ‘abused in order to discredit Genesis’? (p. 60.) Was it Green’s object to abuse Scripture in order to discredit Scripture? Really, what Crowe approves of on the next page, in the words of Henry Morris, is not far from what Green contends: that Genesis 5 contains “the only reliable chronological framework we have for the antediluvian period of history.” Does a ‘framework’ mean an exact delineation of years? Does Henry Morris intend for us to take what he says that way? Or is Crowe just fishing for support where none can be found? When Hodge asserts that the Church has been forced to accommodate scientific discoveries, does that mean that Hodge is guilty of destroying Genesis? (pp. 115, 116.) An allegation like that does not accord with calling Hodge a great defender of the faith (p. 109.) Moreover, the quotes that are gathered from the works of Hodge do not contain the concessions to evolution that Crowe alleges. I do not see from these quotes any evidence of Hodge being a ‘piecemeal accommodating apologist’ (p. 124.) As far as I can see, Hodge maintains the same ground as the man that Crowe finds no fault with: R. L. Dabney. Though Warfield sometimes concedes too much to evolution (pp. 158, 174), is it fair to put incriminating words in his mouth? From page 163: “‘The Bible tells us nothing about the mode of creation’ is little more than a euphemism for ‘I do not accept what the Bible tells us about the mode of creation.’” No source is cited for this, and calling the statement a euphemism for not accepting what the Bible says is unfair. If one does not believe that the Bible teaches a certain thing, then it is hardly an issue of not accepting what the Bible says about it. The lack of proof for Crowe’s many allegations begs another criticism regarding yet another ‘quote.’ If you claim that H. G. Wells wrote that inferior races ought to be exterminated, would it not, considering the seriousness of the charge, be kind and prudent to cite the original work in which the statement was made instead of relying on secondhand sources? (p. 268.)

After all of his ranting and raving against Spurgeon, Green, Hodge, and Warfield, Mr. Crowe attempts An Exegetical Study of Genesis, which I did not find compelling at all. It did not come close to convincing me of Crowe’s very particular Creation Without Compromise. I found it not only unconvincing, but confusing also.

It is true that “Christianity has no place for random chance; evolution has no place for God’s design” (p. 25.) But Crowe’s Creation Without Compromise is not the book that I would recommend for showing the truth of this. In this book may be found a store of facts by which to expose the falsehoods of evolution and to highlight the truthfulness of the biblical account. It contains enlightening facts on the characters and events that helped to occasion Darwinism, like the writings of ’s grandfather and the death of ’s daughter (pp. 84, 89, 91, 159.) The liberal scholar’s contradictory use of Scripture is nicely shown (p. 169.) The contents of ’s Origin of Species are neatly summed up (p. 97.) There is more than one instance of wit: “While the ‘dogmatic agnostic’ may be an oxymoron, it is not an endangered species” (p. 87.) And our interest is heightened by the mention of some old books in which the great controversy between evolution and creation was waged when still in its infant stage (pp. 194, 195, 197.) But the author of Creation Without Compromise is often unfair, frequently nasty, and his exegesis is muddling and uneventful.

Style:  B (Commonplace.)
Tone:  C (Overconfident, condescending, and slanderous.)
Grading Table: A: a keeper: reread it; promote it; share it.
B:  an average book: let it go.