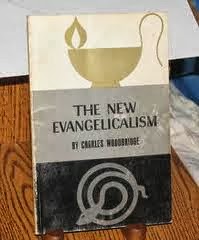 That Christian who has read little or no theology from eras previous to the 20th century is probably part of The New Evangelicalism. The term is not a putdown. It was coined by a spokesman for the new approach: Boston pastor Harold Ockenga. “In a formal statement he has declared: ‘The New Evangelicalism has changed its strategy from one of separation to one of infiltration’” (p. 14.) This new strategy is not biblical: “Had Moses been a New Evangelical, he probably would have reasoned thus: ‘Would it not be better for me to infiltrate Egypt rather than to separate myself from it? Would it not be more profitable if I disregarded God’s command and remained in Pharaoh’s court as a witness to the glory of God?’” (p. 13.) Here is the qualification: “Ministers of the gospel may certainly accept invitations to preach, even in strange and unexpected places, provided that they do not put themselves under the sponsorship or auspices of false teachers” (p. 41.) The new evangelicalism strategy is the same old pragmatism that the Jesuits used: “the teaching that the end justifies the means utilized in the attainment of the end” (p. 31.) The root cause of this pragmatic approach is the idea that “a new system of thought and practice is needed in setting forth the message of salvation” (p. 16.) The biblical methods of old are deemed insufficient. Dr. Woodbridge sketches the story of this new evangelicalism, proves his thesis against the new way, and names the guilty parties, just as the apostle Paul used to do.

New Evangelical magazines include World Vision, Christian Life, Moody Monthly, Christianity Today, and Eternity. These magazines, by promotion and publication, are connected to heretical beliefs in their effort to achieve their desired end. “Over against the teaching of the Word of God, some of the New Evangelicals now imply that in dealing with heretics the test is no longer doctrine but love. We must be less concerned about the theological errors of unbelieving ministers and more concerned about exhibiting love toward them” (p. 24.) This is to adopt “the ‘soft line’ of appeasement rather than the Biblical ‘hard line’ of repudiation” (p. 25.) The peer pressure to adopt the soft line is indeed great, since even Billy Graham has adopted it. “In the Los Angeles Graham crusade, the honorary chairman was none other than Bishop Gerald F. Kennedy of the Methodist Church” who, in a book called God’s Good News, “eloquently denies the deity of Christ” (p. 39.)

“Frankly, if you do not genuinely believe the Bible, or if you lack implicit faith in the accuracy, finality, and complete validity of the Word of God…this message may seem to you to be strange, exaggerated, or irrelevant” (p. 9.) Beware, New Evangelicalism is “a false doctrine which seems to have a fascinating appeal to theologically unwary or academically ambitious souls” (p. 21.)

The author’s affiliations (see back cover) may be irreconcilable with this book’s message.

Content: A- (New Evangelicalism defined, exposed, and refuted.)
Style: A- (Concisely communicated.)
Tone: B  (Quaint but true.)
Grading Table: A: a keeper: reread it; promote it; share it.
B: an average book: let it go.
C: read only if you have to.
Posted by The Analyst at 11:48 AM