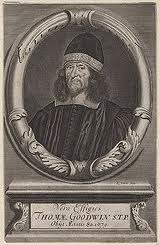 The first thing to keep in mind when reading this brief treatise is the status of the supplicant. He must be a child of God in order to expect a return of prayers (p. 739.) Thomas Goodwin does not go into how one becomes a child of God. This knowledge must be sought elsewhere to ensure that prayers will not rise in vain. God hears an enemy; but we want him to hear with favor (p. 711.)

What is prayer? The Puritan gives a bold answer. Prayer is suing God for his promises (p. 712.) “God is made our debtor by promise” (p. 713.) This begs the question: what is a promise? A promise may be indefinite, which fact many wings of God’s Church are in dire need of understanding and accepting. (Ancient treatises are the best cures for modern delusions.) While it is true that God often restores the sick when they pray, the promise in James 5.15 “cannot be universal, for it might then be supposed that men might never die” (p. 718.) Healing is not denied as a possibility by Goodwin, but the softer word ‘restore’ is used by him, probably because healing usually comes about through natural means. God’s promises of long life, riches, and honors are indefinite also, as experience alone is enough to show (p. 718.) Balance, caution, and common sense are the fruits of careful exposition. The Return of Prayers is a stern return to sanity for people used to treating God like a bellhop. Not that Thomas Goodwin dismisses the possibility that temporal blessings may be obtained through prayer. Far from it; special faith may even be given to this end, he admits, or a secret impression (p. 715.)

That God is our debtor by promise does not mean that all we have to do is sue him through prayer to get what we are allowed to receive from his hand. Importunity and subjection to his will are necessary (p. 725.) So are sanctification and necessity: an answer may be denied until we are weaned from a lust or until our need becomes extreme. Then God’s goodness will be delighted in. (p. 729.) This is painful teaching that many will find impossible to accept. But it is all backed by reference to Scripture. “How often has God been ready to grant a petition, even setting His seal to it, but an act of treason comes in between and stops it in the seal, and defers it, blots and blurs all, both prayer and grant” (p. 741.) We have all suspected as much. Our suspicions that past expectations have been blasted by sin are vindicated in this treatise. We may have been given a persuasion in prayer, even, that such a thing will be granted. But then we dealt falsely in the covenant we made, and because of that, were denied. “When David failed in his holy walk, God told him, ‘I would have given you much more’” (p. 725.) This is hurtful news we need to hear. That is a perfectly legitimate application from the story of David’s life. “The spirit of supplication in one while praying should become a spirit of obedience when finished” (p. 726.)

When Mr. Goodwin interprets a hard saying, he always gives us reason from Scripture to believe his interpretation. One time he turns to the life of Moses to interpret a phrase from David. “My prayers returned into mine own bosom” (Psalm 35.13) is like Moses being offered a great nation in return for praying for stiff-necked (p. 719.) Sometimes God would dissuade prayer for someone altogether (another hard saying.) He did it when Samuel mourned for Saul; and he told Jeremiah to cease praying for his people. But when God calls on us to pray, he supplies us with arguments at hand to put before him. “Be careful to observe such times when God does this…You know then that you have his ear, and you may never again have such an opportunity” (p. 722.)

Though there is nothing in here to tickle the ear (and who should want to be flattered by falsehoods?), encouragement is not wanting. Answered prayer yields comfort from the knowledge that God concurred with you in a matter (p. 714.) Many such seeds of encouragement are dropped into this tough treatise. Do your prayers seem rough and rude to you? “Hezekiah’s expressions…[Isaiah 38.14] are referred to as chattering, yet God heard them” (p. 739.)

The Puritans are fond of this saying, ‘a token for good,’ which is taken from Psalm 86.17. When Rebecca offered Abraham’s servant a drink, and agreed to water his camels also, that was a token for good because the servant had prayed that the damsel he looked for would obey his request. So our answered prayer may come stamped with the token (or special providence) we requested (p. 728.) When we have neglected to ask for a token, no worry; God often answers our prayer in an extraordinary manner so that we may see his hand in the affair (p. 727.)

The big question is (and the one I was looking for an answer to): how do we discern between answers to prayer and events that come about by ordinary providence? Things obtained through common providence come with thorns, or vexations; what comes by prayer is less thorny, because the curse is taken out (p. 732.) Things granted through ordinary providence increase our lusts; answers to prayer cause us to mourn over sin and to rejoice in God more than in what he granted (p. 731.) “Prayer and thanks are like the double motion of the lungs; the air that is sucked in by prayer is then breathed forth again by thanks” (p. 731.) If your prayers and blessings result in thankfulness to God, it may be that what you are granted (provided you prayed to receive it) issues from a return of prayer, not just from providence, which even the enemies of God have a stake in.

Another big question is (though a smaller one): how may we know, when denied, that our prayer has been heard? If you can be thankful after what you asked for is denied, then you may assume that you’ve been answered. If you are not discouraged, you’ve been heard (p. 737.)

Things petitioned for by me seem to have been denied more than granted. If your case is like that, these two facts are two thoughts to treasure up: (1) “It moves God to see His children take repulses and denials well” (p. 737); (2) “When prayers are answered, mercies usually come thick and fast” (p. 728.) Goodwin seems to speak from experience here.

Content: A (An inquiry into answered prayer.)
Style: A (Proverbial.)
Tone: A (Prescriptive.)
Grading Table: A: a keeper: reread it; promote it; share it.
B: an average book: let it go.
C: read only if you have to.
Posted by The Analyst at 9:41 PM No comments: