Mr. Bradley is the President of the Ministerial Association here in . He gave no answer to my warning about the suspicious fellow he received into his pulpit: Mr. Hawkins. (About that, see the archive to the right: September, 2012.) And he gave no response, either, to the following warning I sent to him last month (February 2013.) Can the president of this city’s ministerial tell a wolf from a sheep? It seems not. Of course, this should not surprise anyone, for the Red Deer Ministerial is made up of both orthodox and heretical ministers, which kind of ‘brotherhood,’ or blend of light and darkness, is condemned and disallowed by the apostle Paul in the closing verses of 2 Corinthians 6. The president of a ministerial body consisting of sheep and wolves cannot be that discerning of any minister! He can’t discern up close and personal. It is no wonder that he can’t discern beyond his own mongrel pasture!

Here are, from the magazine mentioned in the letter, the affecting photos of this suspicious, globe-trotting Dr. Saddiki (whose doctorate is merely honorary.) He has a fancy fable to fool you with. Beware of his ministry of mammon. The man wants your money. 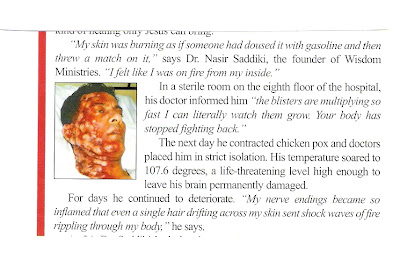 Yes, watch out, for Mr. Bradley may soon invite this wolf to town, to the disservice of many a sheep! Such is Mr. Bradley’s discernment and care! Remember Saddiki’s name, mark it down, and be watchful! Spare yourselves a mauling once in awhile at least! Making money through manipulation is the sham minister’s chief employment. A few years ago a politician down in was accused of groping wallets. The sham minister will maul your money just like that! Needless to say, he will do no good to your soul!

To the letter, now, that I sent to Mr. Bradley last month:

I have a copy of the Missions Fest magazine that was given out in your church. You recommended an article in there about Dr. Saddiki (or Siddiki, for the name is spelled both ways on the page.)

We should be instantly suspicious of an ‘evangelist’ who claims that the Lord has worked some great miracle upon his body because “many false prophets are gone out into the world” (1 John 4.1.)

Notice that the doctors who spoke so despairingly of Dr. Saddiki’s Job-like affliction are never named. Why not? Notice that Dr. Saddiki’s ministry consists of ‘biblical principles for success.’ Notice (in the picture below the article) the man’s fancy suit and tie and what looks to be his ‘trophy’ wife. These signs are bad omens, for they are exactly the characteristics that we discover in the lives of prosperity preachers of the greediest, basest sort. These men are all about sham, show, and stuff, which they sum up in one word: ‘success.’

After noticing these things, I predicted that if I were to go to this man’s website, I would see there a mammon-centered effort, not a Christ-centered ministry. What did I discover? I discovered a very visible ‘donation’ button. I discovered the book he has written: Kingdom Principles of Financial Success, which is about ‘God’s abundant life of prosperity and financial success.’ I discovered the other book he wrote: How to Prosper in any Recession. His episode of shingles happened in 1987. His books were issued in 1999 and 2009. My, what spiritual progress the man has made! After all this time— after the big miracle upon his body and the other upon his heart, his mind is still fixed on money matters, not spiritual realities! It says in the article that after his conversion, “the Holy Spirit brought a voracious spiritual hunger that caused him to want to know about Jesus.” A voracious hunger for money has nothing to do with knowledge about Jesus, though. This article is a clever ad to steer readers to this man’s website, where money, not Jesus, is the aim and king. His education comes out of Rhema, as does that of his wife, which institution is the manufacturing house for prosperity preachers who make it their business to fly all over the world proclaiming healings and miracles where none can be found, which they do to receive undeserved glory and to draw gobs of money through which to glut their lives with earthly riches and amusements.

Are you suspicious of this man yet? You should be. What happens when a man is saved and cured by the Lord? Does he become Christ-centered? That’s the way it went for A. B. Simpson, the founder of the once-doctrinal denomination. How come this is not the way it turned out for Mr. Saddiki? Is it possible that he is a liar who has money for his god? A man who has received Jesus Christ does not preach mammon. You do not believe that one would, do you? You do not believe a mammon-centered ministry to be the fruit of the Spirit, do you?

Did the New Testament disciples ever preach mammon? I cannot find that they ever did. Do we have any word from Jesus about treasures on earth? He tells us to lay up treasures of another kind, doesn’t he? If Dr. Saddiki really saw Jesus like he says he did, or encountered him in a saving way, would he not be in harmony with what Jesus says must be the new disciple’s aim? Would a saved Saddiki not be feeding us heavenly doctrine about Jesus instead of points on how to lay up treasures on earth?

Jesus’ word to new disciples is, “But lay up for yourselves treasures in heaven” (Matthew 6.20.) What are ‘principles for success’ but the opposite aim? Jesus says, “But seek ye first the , and his righteousness; and all these things [food and clothing] shall be added unto you” (Matthew 6.33) What is Mr. Saddiki seeking? The kingdom of heaven? No, but ‘kingdom principles of financial success.’ And does Mr. Saddiki preach the abundant spiritual life that Jesus speaks of? No, but an ‘abundant life of prosperity and financial success.’ Jesus says, “For where your treasure is, there will your heart be also” (Matthew 6.21.) Where is Mr. Saddiki’s heart? It is set upon treasures on earth, isn’t it? After he was healed and saved, or ‘transformed,’ the article concludes, “Dr. Siddiki’s passion has been to know and serve the Lord Jesus Christ.” Why the books on mammon then? Should we not expect a ‘transformed’ man to be passionate about preaching ‘Christ crucified’ instead? That’s what the apostle Paul did when he was saved and healed! What does it say in the book of Acts about this? “And straightway he preached Christ” (9.20.) Let’s compare, shall we? Dr. Saddiki suffers (presumably), and then after getting saved and healed, he preaches mammon. The apostle Paul is saved and healed, upon which he preaches Christ ‘straightway,’ then his other sundry sufferings begin, endure throughout the course of his life, and then he is martyred. These two testimonies are quite different from each other, aren’t they? Yes, one is about prospering on earth and an easy life; the other is about an arduous life and a cruel death for the sake of a Saviour and Lord truly known, felt, obeyed, served, and worshiped. I didn’t even mention the trophy wife that Paul didn’t get! Is Dr. Saddiki a man you should be recommending to your congregation? This man’s purpose is the precise opposite of what a disciple’s ought to be! “Wherefore by their fruits ye shall know them” (Matthew 7.20.) Know who? False prophets (verse 15.)

Mr. Bradley, if you are a good shepherd, you will share this letter with your people, or you will at least make them aware of the dangers of what you recommended. There is more than enough to be gathered from the article and from the man’s website to give us reason to doubt his fantastic-sounding story. And the man’s mission is about as different from a biblical one as that of Barjesus from the apostle Paul’s! (Acts 13.6.) To put Dr. Saddiki and Barjesus in the same camp is not farfetched, for Barjesus sought to turn people from the faith and “to pervert the right ways of the Lord” (verses 8, 10.) I have shown you that Dr. Saddiki’s way is a perversion of what Jesus tells us the disciple’s way must be. And to urge Christian people to pursue money, which is what Mr. Saddiki does, is an attempt, whether he realizes it or not, to turn them away from the faith.

Should you warn your people about this man whose testimony you recommended, maybe? I admonish you to be vigilant about articles and magazines before you recommend them. Because of your position, what you say influences what people do. Why don’t you find out what the knows about Dr. Saddiki? The story over there (if there is even one to tell) will be at odds with the fable we are told in this article. You recommended the man. Why don’t you look into it? A man with integrity and a biblical work ethic would do nothing less. This is your job to do, not mine. Whatever the true story is, the fact is that this man is all about earthly riches, not the riches of Christ’s person, word, and work.

Your responsibility is to be sound in speech. What you say from your ministerial position should never be of the sort that may be justly condemned (Titus 2.8.)

If you are a good shepherd, you will right your wrong. I have done my part in bringing this matter to your attention. One Day you will give an account for the people who are deceived through your careless, thoughtless recommendations.
Posted by The Analyst at 8:48 PM