There has been little visible opposition to gay pride progress in our city. There had been more if all the letters to papers had been published. Mine to the Express was denied. The article that follows is an amplification of that unpublished letter. While doing research for this article, I stumbled upon the best thing that I have ever read by a gay guy concerning gay aggression. Here is the link, from a site called pfox.org:


Now to my article, preceded by a little clip in order to supply some context. Have any of our pastors addressed the recent homosexual goings on in this city? I suppose that some of them are accepting of unrepentant gays for church members, just as many of them are accepting of unrepentant adulterers and fornicators for the same. At least they are consistent. 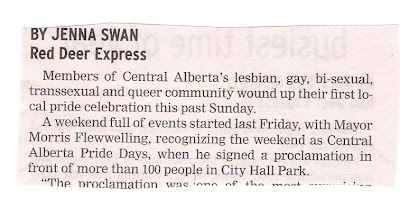 Red Deer Express, August 14th, 2013. Gay pride in a redneck city seems like a queer idea and a perfect storm. But it’s just a queer idea. While I’m not in favor of promoting violence against queer persons, it would be encouraging if rednecks would at least frown upon queer associations. Is it still permissible to frown at those who celebrate what to God is an abomination? If the queers have their way, even frowning at them will be outlawed. Notice the progression. They get a proclamation from the mayor. Next, according to event organizer, Kristol Gallivan, they must ‘come up with bylaws’ (end of article, not pasted in here.) There was no resistance to their gay pride fruit float. But tolerance must be forced. That is the way queers operate. They call themselves queer, but they don’t want to be called queer. The laws protect them, but they want bylaws too. They are tolerated, but they whine about intolerance. Why?
Queers don’t want to feel like exceptions in the crowd. They want to feel at ease walking hand in hand. They want open kisses without criticism. They want to flaunt their Heinz 57 lifestyles like Texan women do their hair. By suppressing an already tolerant community, they hope to gain enough courage to do it all. If they could get away with it, many of them would, I think, go so far as to coerce non-queers into queer participation. From where do I get a notion like that? I get it from inspired history and human psychology. Modern queers are in harmony of spirit with the queers of old. “And they called unto , and said unto him, Where are the men which came in to thee this night? bring them out unto us, that we may know them” (Genesis 19.5.) Queers, deep down, want proof of allegiance by mutual participation. Thanks to God, there are fewer of them than there are of us. The record from Genesis is not surprising in light of human psychology. What do drunks want but everyone to join in? What do drug addicts want but addicted friends? What do fornicators want but open marriages? What is peer pressure but a kind of force? You are a queer thinker if you believe that queers don’t want everyone to dip into their lifestyles. Such promiscuous participation would go a long way toward making them feel that their abominable acts are okay. Then they would not second-guess their queer gestures in public. Then they would handhold, kiss, pet, and set new standards in public for everyone.

Thankfully, a proclamation from the mayor, a reception in a bar, a multi-faith service sanction, and an unobstructed fruit float is not a forceful enough foursome to coerce intimate knowledge of queerdom. The queers who pounded on ’s door were unsuccessful against the angels of God. And their modern partners in crime, we should pray, will be unsuccessful due to God’s grace unto salvation. May gay pride progress regress by God’s regenerative act upon gay sinners. This ought to be our prayer if we believe that fire and brimstone, if it doesn’t get you here, will get you Hereafter. That goes for queers, rednecks, and every sinner in between. Jesus may have walked among every kind of sinner. But he participated in no kind of sin. Unlike our mayor, he did not honor sin with a proclamation. He faced it head on with a denunciation: “Repent: for the kingdom of heaven is at hand” (Matthew 4.17.) That sounds as intolerant as the edict in Leviticus 18.22.

Forget about pushing for bylaws to conform society to sin. Non-conformity to God’s law calls for the bylaw of repentance. Repent, turn to Jesus for justification and forgiveness, and join the Higher Society of Heaven. Join the angels of God who resisted gay aggression.
Posted by The Analyst at 11:54 AM