PROGRAMS IN PLACE OF PREACHING 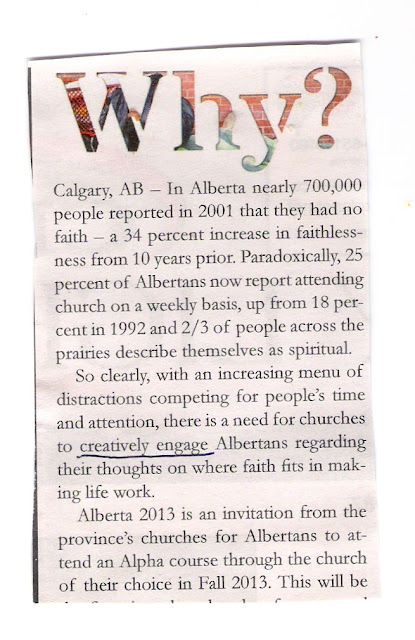 (City Light News, June 2013.) The writer of this article is puzzled that faithlessness and church attendance are on the increase together. The answer just happens to be in the big question period at the head of the article: ? Doctrinally anemic programs like Alpha (which has the big ? on the cover of its book) are largely responsible for the increase of both faithlessness and church attendance. ‘Creative engagement’ is less offensive and judgmental than preaching; and so it’s an attractive way for timid Christians to give church growth a whack. You get lots of husk but not a lot of kernel that way, many unbelievers, but few converts. Church growth, of whatever sort, must be what Alpha pastors are after.

This is how dull the talking heads at church meetings are. Faithlessness and church attendance are up. The cause of this strange harmony: faithless programs that plant infidels in God’s Church. Not realizing what the cause is, these heads of churches (ever talking, never preaching) put their programmed heads together around some boardroom table and decide to take advantage of the paradox by setting up a whole campaign of programs! Yes, Alberta 2013! That’s the newest gospel replacement. Get ready, not for revival, but for a bumper crop of faithlessness. ‘Building bridges’ has a positive, constructive sound. The problem is that the bridges lead to everywhere but the cross. The campaign “will provoke people to ‘Question Everything.’” Yes, people will be provoked to question many things—except the merits of all these faithless Alpha courses! People are distracted by many things, it says in the article. Yes, they are distracted by many things, not the least of which are programs like Alpha! Did Peter or Paul and their Master try to ‘creatively engage’ sinners with innocuous programs whose way of witnessing is to make faithless sinners feel they have faith already? No, but the New Testament model is just too discriminate and offensive for bloodless pastors to use. All their weak hearts can do is pump up more programs. They have no heart for preaching, no heart for the gospel, no heart for the heart of Christianity. They’re scared right down to their shriveled up arteries. The truths that made great preachers of old bubble up with heat and light, our pastors turn white at the suggestion of. To preach down to sinners a gospel from above is a horrid thing to these men. To say ‘repent’ with distinction, detail, and exclamation is the shibboleth they can’t utter. They are foreigners to preaching, just as the men of Ephraim were foreigners to the word that they couldn’t pronounce. They ‘compass land and sea’ to make proselytes to programs, but take no steps at all to becoming proselytes to preaching in order to save the souls they gather. The gospel is their shame; programs are their crown. Alpha is their smooth way; the Way of Life is too rough for them.

“For I am not ashamed of the gospel of Christ: for it is the power of God unto salvation to every one that believeth; to the Jew first, and also to the Greek” (Romans 1.16.) And notice: “But we preach Christ crucified, unto the Jews a stumbling-block, and unto the Greeks foolishness” (1 Corinthians 1.23.) Many who are preached to stumble at the word and cause trouble, like the unbelieving Jews who continually hunted the head of Paul. Many others who are preached to regard the word as foolish, and so the preachers of it they treat as fools. Caving in to such responses is what Paul warned Timothy not to do: “Be not thou therefore ashamed of the testimony of our Lord” (2 Timothy 1.8.) Jamieson, Fausset, & Brown on this: “Paul…felt it necessary to stir him up and guard him against the possibility of unchristian dereliction of duty as to bold confession of Christ.” Is Alpha’s cowardly approach a bold confession? It is because pastors have caved in to the pressure of the possibility of persecution that they resort to programs in place of preaching. They will not risk so much as being called fools for the sake of preaching Christ. Caving in is what pastors do through Alpha and similar inoffensive, seeker-friendly, creatively engaging, ecumenical-minded courses and programs. To be ashamed of preaching Christ crucified is to be ashamed of Christ, if anything is.

What kind of message does God use to effect revival but the effective, faithful preaching of his holy word? Here is the sort of content that a revival message contains, in the words of a minister actually used by God in a broad way: “The object was to make the impenitent feel that they were under a righteous condemnation, that they had destroyed themselves, that their hearts were entirely alienated from God, that in this alienation lay their guilt and not their excuse, that, of course, they were bound to repent and become reconciled to God without a moment’s delay, that, nevertheless, so desperate was the depravity of their hearts that nothing short of the power of the Holy Ghost would ever subdue it, and that God was under no obligation to exert that power. So far as could be known at the time, and so far as the ‘fruits’ enable us to determine, these and other kindred truths were ‘the power of God unto salvation’, to multitudes that were ready to perish. The design was to exalt God and bring the sinner in guilty at every step, not to terrify even the vilest transgressor so as to render him incapable of reasoning and reflection, but to induce him, under the strong convictions of an enlightened conscience, to ‘flee from the wrath to come’, and ‘lay hold on eternal life’” (Heman Humphrey, in W. B. Sprague’s Lectures on Revivals of Religion, p. 360.) Do ministers leading Alpha preach like this? I know that they do not. Do they even try? I don’t think so. Preaching Christ crucified involves more than coaxing people to a ‘decision.’

Are you a pastor seeking to gain a world of churchgoers through faithless programs? Are you willing to receive churchgoers as church members, no matter how worldly and unrepentant they may be? Let the Scriptures reason you out of that for the good of your own soul and the poor multitudes that you refuse to really preach to. “For what is man advantaged, if he gain the whole world, and lose himself, or be cast away? For whosoever shall be ashamed of me and of my words, of him shall the Son of man be ashamed, when he shall come in his own glory, and in his Father’s, and of the holy angels” (Luke 9.25, 26.) If these verses seem not to touch you, then consider that you may be spiritually blind. If you will not consider that you may be spiritually blind, then count on it: you are spiritually blind for sure, for a man whose eyes have been opened by the grace of God will not begrudge to examine his profession of faith. Hath God given you a spirit of fear? (2 Timothy 1.7.)
Posted by The Analyst at 10:49 AM

I can think of only one sermon in the almost decade of living in Red Deer, where the pastor actually talked about the threat of hell as a real place, and that the unrepentant are going there. That one sermon was by Will Graham (Billy Graham's grandson) at the ENMAX Centrium years ago. What has happened to today's church is nothing less than a disaster. I think of it as the last church, the seventh church, the church at Laodicea, in Revelation 3.

Keep up the good work.

Thank you for that confirming comment. I did not hear Will Graham that time. I have never heard him. I only remember one thing about his visit: the brochure advertising the event seemed to forecast sideshows instead of sermons. If the need of repentance and the certainty of hell were at least mentioned once, then I can be thankful just a bit. I hope there was a lasting influence on someone. The state of the Church today reminds me of that of the Laodiceans too. There is a remnant, however, in churches and out of churches. Every professing Christian must examine himself to make sure he is part of that remnant.