“And they sing the song of Moses the servant of God, and the song of the Lamb” (Revelation 15.3.)

Introduction. “The song of Moses the servant of God, and the song of the Lamb.” The clause—‘the servant of God'—is inserted by the Holy Spirit to guard the honor of our blessed Lord. Moses’ song is united to the Lord’s in order to show that the glorious overthrow of Pharaoh at the symbolized the total destruction of Satan and his host at the great battle of the Lord. There will be a song of triumph then, just as in Moses’ day. Here are three parallels.

(1) The Position of the Children of , Symbolic of our Own. Like the vast host of , the has been delivered from bondage, from being slaves of sin and Satan in our natural state. The iron yoke is taken from our necks; we no longer serve our lusts and the tyrant of sin. Joyfully we pursue our way through the wilderness. But we are pursued by Pharaoh, and some of us would almost give up and go back. We are not in yet, though we have tasted a few sweets from there. We are commanded to go forward through the Sea, until the last of us is safe on the other side. Then the world will suddenly be destroyed.

(2) The Triumph of Moses, a Picture of the Triumph of the Lamb. Now the song of Moses was sung by the side of the sea, which was glassy, and still, with the enemies all sunken to the bottom of it like a stone. The sea upon which God’s people shall walk shall seem to be a sea that is clear, while down in its hollow bosom shall be the horrid depths where the wicked must for ever dwell in the fire—and so we have in Revelation the statement, “a sea of glass mingled with fire.” One reason why Moses sung this song was because all were safe. I strongly believe that there will be cause for singing again, just because of all the safety of the Church. As many as God has chosen, and Christ redeemed, and the Spirit called, as many as believe, shall arrive safe across the stream. The rearguard shall soon be where the vanguard already is. Every last one of God’s elect will one day stand upon the shore. The song would be unpleasant if it were not so. Perhaps the major part of Moses’ joy lay in the destruction of all the enemies of God. “The horse and his rider hath he thrown into the sea.” And you wait awhile—there will be singing by us on account of the end of , Mohammed, the Secularist, and all Idolatries.

(3) Similarities between the two Songs. I think one might well have chosen to be a slave in , just to have stood in that mighty host who sung such mighty praise. Note, the praise was all to Jehovah, not even a word for Moses, the great lawgiver and miracle maker. And the last song will be wholly to Jehovah too. Even Luther and Whitefield will be like stars that refuse to shine when the sun appears. Note, the song of Moses describes the attack of Pharaoh—it is part of the song. A song is made out of the wrath of Pharaoh. And it shall be so at the last. The wrath of man shall praise God. Yes, fury, hatred, and weapons, all shall be woven into a song. Smite on, smite on, tyrant! The harder your blows, the sweeter our song, and all the worse for you in the end. And note, the emphasis in Moses’ song, “not one”—not one enemy left. And how easy is the overthrow! God, not us, causes his enemies to be “as still as a stone.” Then “the Lord shall reign for ever and ever”—O! may we be there to sing this!

Selection from Conclusion. “May God bless you, and give you all to taste of his salvation, that you may stand upon the sea of glass, and not have to feel the terrors of the mingled fire in the lower depths thereof! God Almighty bless this vast assembly, for Jesus’ sake.” 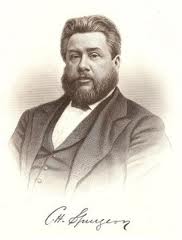