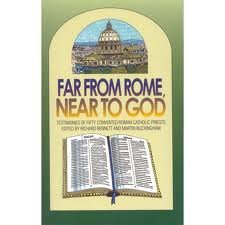 Mass, Mary, monk, missionary; , catechism, unction, heretic: these are some of the words that strike the eye when the pages are rolled off the thumb, a good preview of the themes you will encounter in these fifty testimonies, all of them recent. Many, if not all, of these fifty converted priests had entered the priesthood with good intentions, like little Jose Fernandez: “My greatest delight was to serve as an altar boy” (p. 172.) As priests, they tried their best to obey ’s unbiblical prohibition against marriage. They found no power in this religion to mortify their bodily desires. Herman Hegger: “We scourged ourselves several times a week, lashing our naked bodies with knotted cords” (p. 296.) Remember, these testimonies are all from the 20th century!

It is astounding to learn how little the Bible is involved in the making of a priest. Juan Sanz: “No seminarian could possess or read a Bible during his first eight years” (p. 149.) Bartholomew Brewer: “My transcripts from thirteen years of formal study in the Discalced Carmelite Order show that I had only twelve semester hours of Bible” (p. 23.) Bob Bush: “The only type of religion to which we were exposed was Roman Catholic theology and tradition with no emphasis on the Bible” (p. 65.) Simon Kottoor: “The teaching of the Church, called the magisterium, based on tradition, was accepted as the final authority, not the written Word of God, the Bible (which was an unopened book, even for those studying for the priesthood)” (p. 129.) Cipriano Valdes Jaimes: “For five years I studied the Latin of Cicero and Virgil. For three years my mind was filled with the philosophy of the Greek writers. With great care I was given four years of theology, where I learned all the dogmas of Romanism” (p. 79.) Salvatore Gargiulo: “In fact my theological studies were really based on scholastic philosophy and not on the Bible” (p. 272.) Carlo Fumagalli: “Roman Catholic theology is thus built up around pagan philosophy” (p. 278.) At best, as Enrique Fernandez puts it, “I knew only those parts of the Bible which were included in the Mass and in the texts of the Roman breviary” (p. 139.) What then is the result? Richard Peter Bennett: “My training in philosophy and in the theology of Thomas Aquinas left me helpless” (p. 348.) Salvatore Gargiulo: “Sadly, in spite of having a degree in theology, I knew nothing of the peace and simplicity which salvation by grace provides” (p. 273.) And how are the spiritual concerns of priests handled by their superiors? “After my ordination to the priesthood,” says Mr. Khouri, “the doubts remained. My superiors called these doubts ‘an angelic virtue’” (p. 109.)

Happily, they all found peace and simplicity in salvation by grace, but only after much precious time and effort wasted. Anibal Dos Reis: “In October 1956 my father died of lung cancer. I spent a whole year praying daily Masses for his soul” (p. 99.) Salvatore Gargiulo: “Another two years of uncertainty, hesitation and seeking went by” (p. 274.) Richard Peter Bennett: “The cobwebs of church tradition that had so clouded my twenty-one years as a missionary in Trinidad, twenty-one years without the real message” (p. 354.) How can seekers of truth be held in error for so long? Charles Berry: “I had been taught all my life to fear and distrust Protestant pastors” (p. 63.) Hugh Farrell: “The routine of the seminary is so arranged that one seldom has time for real reflection…if the mind is allowed to wander, one is in danger of committing a venial sin” (p. 31.) Thoufic Khouri: “I believed…that alone was the custodian of salvation” (p. 113.) What must it be like to be held for years in the grip of religious doubt and consternation?! It was “a time of sleepless nights, agonizing indecision and a frightening lack of courage,” says one priest (p. 268.)

The main doctrinal problem in has to do with its misapplication of Christianity’s most vital tenet, the atonement. By the performance of the Mass the bread and wine are supposed “to change…into the actual body and blood and soul and divinity of Jesus Christ…entitled to the worship of adoration” (p. 28.) This idea and practice, these fifty priests came to regard as utterly unacceptable and abhorrent. “The Roman Catholic Church will always insist that the Mass is an ongoing continuation of the sacrifice of Jesus” (p. 76.) But “man can never repeat Christ’s work on the cross” (p. 81) And “the Lord’s sacrifice is all-sufficient and complete” (p. 254.) Though this compilation of testimonies is no theological textbook, confessions by converted priests on the nature of the Mass, I think, may be regarded as accurate. They do seem precise. But presentations of the gospel do not always hit their mark exactly. Beware of that word ‘accept’ (pp. 73, 75.) Accepting (or even believing) that Jesus died for you may not amount to you actually trusting in his death. The presentation on page 157 is good, though: “We can never find salvation while part of us trusts in what Christ has done to take away the punishment of sin, and another part of us still trusts in sacraments, indulgences, and our attempted good works.”


I learned a lot about Roman Catholicism from this book. Church Tradition, not Scripture, is that religion’s foundation. This is why that Church is self-centered instead of centered on Christ. “The biggest gap I could see was that Jesus Christ sought to bring men to God, while the Church was always trying to bring men to itself” (p. 250.) Or, put another way, “The Bible teaches that it is not the church that makes us, but believers who make up the church” (p. 270.)

The modern priest who remains in ‘’ is as liable as medieval priests ever were, “to be damned, excommunicated” (p. 23.) Better to be called a ‘Judas priest’ by priests who remain than to stay and actually be one! (p. 23.) Far From , Near to God is a book that tells the terrible truth of the power of Roman delusion and the more powerful grace of God—fifty times over. A man like Luis Padrossa can be trusted: “After living forty-years a sincere Roman Catholic, fifteen of intense ecclesiastical training, ten as a priest and a popular preacher to great multitudes, and twenty-three of religious life in the Jesuit Order, I arrived at the conviction that the Roman Catholic Church was not the true Church of Jesus Christ. Thirteen years of intense study of apologetics brought me to an unbreakable conviction. I know the arguments on both sides,” he says, “I have analysed them” (p. 196.) Tragically, many Protestant churches today are “Rome-ward bound at the expense of biblical truth,” as Mr. Brewer observed when he came out of Rome “in search for truth” (p. 24.) “The variety of churches can be discouraging and even dangerous,” he says, because of the popular “ecumenical folly.”

Content: B  (Important but repetitive.)
Style: B  (Not as eloquent as true.)
Tone: A- (Appropriately solemn.)

Grading Table: A: a keeper: reread it; promote it; share it.
B: an average book: let it go.