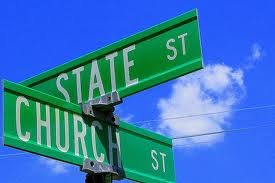 (The above picture is not on the book; but it is suggestive of the intersecting of two kingdoms. The picture on the book you order will be a somewhat random affair. Mine was appropriate to the subject. There is no dust jacket, an excellent idea!)


The question of Church and State exists when conformity to national religion and its religious practice are no longer the accepted opinion (p. 2.) With some help from a Frenchman, Mr. Innes does not take long to show the tension between Church and State: “The Roman empire admitted [allowed] no association within the State independent of the State…The cold hand of the State should not press on the inner kingdom of the soul…Association independent of the State, but without destroying the State, is the great question of the future” (Les Apotres, Ernest Renan, p. 7.) If not persecution for nonconformity, the Christian of Roman times (less in our day) had to beware of civil or military participation, for recognition of Pagan rites is then inevitable (p. 14.) The Christian might also be tempted to yield even more than this, and by a wholly voluntary act, bring the Church under State rule by asking it to settle disputes among churches or sects regarding matters like ownership of property (pp. 16-19) or even orthodoxy of belief (p. 45.)

An edict in 311 ended the last persecution of Roman times (p. 22.) The year following, soldiers marched under Constantine at the sign of the cross, an event showing the subordination of State to Church (p. 23.) At this time, Constantine still worshipped the sun. Paganism was not made illegal by him; nor did he profess to establish Christianity, maintains Innes. The proclamation of Christianity as the religion of the empire came generations later (p. 25.) “When these Christians, with their intense convictions, should have themselves become a victorious majority, how long would the Christian ruler be able to keep his official neutrality and equal-handed justice?” (p. 27.) As Constantine’s convictions became more intense, though, his toleration became (a rare thing in history) vivid. Innes is strong on this point, claiming that justice has never been done to the man on this account. A long quote from the writings of Constantine follows in support of this opinion (p. 30.) However, “to tolerate all religions, but to favour Christianity, was the idea of his reign” (p. 32.) One can see the hint of a crackdown in the word ‘favour.’ Before his death in 337, municipal, as well as Pagan temple revenue, was being turned over to Church use, and forms of Pagan worship were being prohibited (pp. 32, 33.) Through the zeal of his sons, toleration decreased even more, and Constantine’s vision of uniting Christianity and Paganism into a sort of Deism faded into oblivion (p. 33.) “The wheel had now come almost full circle; for not only was Christianity now established, as Paganism had been before, but the open exercise of the one religion was now declared a crime against the State in the same way—and even in the same words—in which in the previous century the law had been bent itself against the profession of the other” (p. 38.)

It is necessary to digress from the summary to observe a little. Historical relations of Church and State are hard to study. What writer can simplify such complexity? But the subject is second to none when it comes to life principles that must be learned from a general acquaintance with it. Here is the most concerning principle that this book is suggestive of. The State is now encroaching on the Church (Canada, 2011); but without warning, and suddenly, the reverse might become the case (which I would not advocate.) Those who are glad to see the Church lose its rights should, with historical precedent in mind, back off for fear of backlash. Christians, for all their talk of peace and love, can be abruptly agitated, who knows by what moral event, and can become, with no warning, just as fanatically ardent to get their opinions into law as most of the worst of liberal activists. It can happen just like that. Liberals should draw back from poking Christians in the eye. Religious zeal is the hardest to stop once it gets moving. Revenge is not something you want to provoke a Christian to, especially nowadays, for today’s Christian has all but lost his compass, his virtue, and his senses. There’s no telling what he might do with the powers on his side.

“The Creeds of the Church down to the Reformation contained nothing on the relations of Church and State” (126.) Then come the Protestant Confessions on the subject, which are more advanced in the advocacy of religious tolerance than was then allowed in practice (pp. 130, 131.) ‘The ruler of the region is the ruler of religion’ (p. 156) proved a dictum not easily dislodged. On the other hand, the imposition of religious observances upon secular peoples leads to reactionary philosophies. While Hobbes (1588-1679) would put faith and conscience in the power of a king (p. 189), Rousseau (1712-1778) would go so far as to have Christian faith disallowed (p. 204, 207.) The State, when supreme, can go this way or that; and so a system yielding liberty for all is the aim.

In Church and State, a Historical Handbook, Innes does not propose an ideal, not by his own pen nor by that of another. But the wisdom approaching to an ideal may be found in the research well organized by him. The question is now more between Parliament and Church than Church and king. But the issues remain basically the same. That the State exists for man, not the man for the State (Kant, p. 252) seems to agree with the State being ordained to bear the sword for the good of man, as stated in Romans 13. The ideal is hinted at more largely by Pope Nicolas I (865) on page 129, and excellently too, if we can get past the word ‘pontiff’ and pretend to see ‘Church’ or ‘church minister’ there instead. In short, his meaning is that the State and Church benefit each other most when they keep to their proper stations, the Church depending on the State to solve temporal issues, the State depending on the Church in regard to spiritual matters. A briefer, though slightly less marvelous sum of the ideal may be gleaned from Coleridge. The Church completes and strengthens the State, he says, but does so from without interference or commixture, as it goes about laying its own foundations. The Church does not ask wages or dignities from the State, but only protection and to be let alone (p. 230.) The page on Locke’s position contains more of the same sentiment, but writ more large (p. 194.) The reality is that “all ideas upon Church and State, and human welfare generally, like gases into different sides of the same chamber, must henceforth meet and mix in the one European democracy” (Innes is a UK author, p. 268.)

This is not a definitive word on the Church/State question; that is not Inne’s design. It is, just as promised, a handbook on the subject from the historical angle. And it’s a good one. This 19th century lawyer delivers a scholarly, readable, stylistically attractive synopsis.

Content: A- (Comprehensive, knotty legal history)
Style: A- (Better than your average legal file, I’m sure.)
Tone: A  (Objective but not cold.)